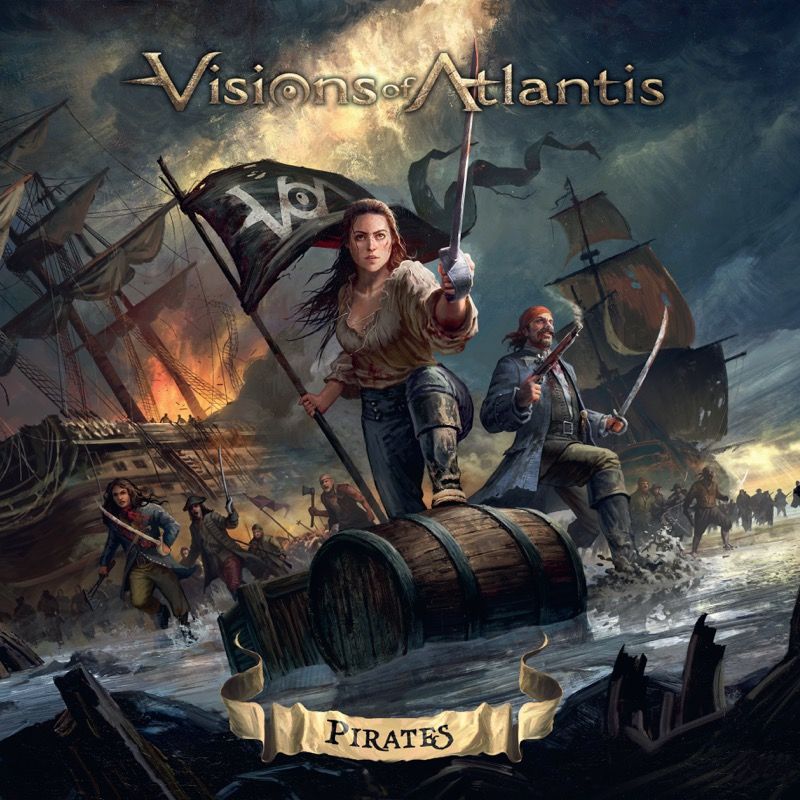 With their latest chart-topping studio album, Wanderers (2019), and the recent release of their first ever live BluRay/DVD, A Symphonic Journey To Remember, symphonic metal visionaries VISIONS OF ATLANTIS have, without a doubt, proven that they are on top of the scene. Now, the band sets sail on another adventurous journey and new exciting chapter, marking a turning point in their discography with the upcoming album, Pirates, out May 13, 2022 via Napalm Records. With their eighth full-length, VISIONS OF ATLANTIS deliver their most confident and honest record so far, proving that they have definitely stopped wandering to finally unleash their rebellious side and a free spirit untamed as the seven seas.

The band invites its listeners to join them on a marvelous ride through intriguing soundscapes and hauntingly beautiful melodies along with smashing symphonic heaviness, that musically and lyrically embodies a form of transition and self-discovery: “We embrace who we are and we can state it in the eyes of everyone that we are Pirates now - we have always been, but now we are confident in our identity and we want to show it to the world”, states vocalist Clémentine Delauney. The new offering boldly opens the door to not only the light parts in life but its lurking with darker aspects as well. “This is actually the process I have been through myself. I’ve been doing a lot of shadow work where you get to know and embrace the dark side of yourself - which is just another part of you.”

With a team consisting of Clémentine herself, vocalist Michele Guaitoli and producer Felix Heldt, VISIONS OF ATLANTIS managed to secure a firm writing crew and shift their musical identity to braver structures and a new world that is way more complex - something that will be the new trademarks of the band. The album pulls the anchor with the epic opener “Pirates Will Return”, which instantly enchants with its hymnlike chorus and showcases the high-class versatility from the very first second. In the blink of an eye, VISIONS OF ATLANTIS manage to create their very own incomparable universe of symphonic epicness, intense riffing and, above all, the impressive vocal symbiosis of Clémentine Delauney and Michele Guaitoli. Delauney’s bewitching offerings oscillate between clear vocals, powerful belting and operatic techniques, whereas matchless counterpart Guaitoli adds spice with top-notch power metal infusions. Pirates presses ahead with catchy hook lines, like in mighty ”Melancholy Angel”, rousing “Clocks”, charging “Wild Elysium” and majestic “Master The Hurricane” – the latter of which will make every symphonic metal enthusiast’s heart pound faster through its perfectly balanced mixture of dramatic choirs, heavy orchestration and dedicated vocals. With “Legion Of The Seas” VISIONS OF ATLANTIS present their heaviest side so far without losing their inimitable feeling for creating dreamlike symphonic melodies. Gentle ballads “Freedom” and “Heal The Scars” immediately evoke goosebumps as the band showcases both a deep emotional facet embodying strength, as well as a common bond. Pirates reaches the harbor for now with mesmerizing “I Will Be Gone”, building up a dramatic wall of sound accented by harmonizing flutes and bagpipes, delivered by no less than FEUERSCHWANZ virtuoso Ben Metzner, who joins also on “In My World”, “Master the Hurricane” and “Heal The Scars”.

This emotive twelve track experience truly allows you to taste the salt of the sea in the air, feel the wind on your skin and embrace the wilderness that only Pirates can feel. “Embracing freedom, going the  uncommon way, ruling our world - no limits to what we can think of, believe and explore. We finally know where we are going, which after wandering totally makes sense!”